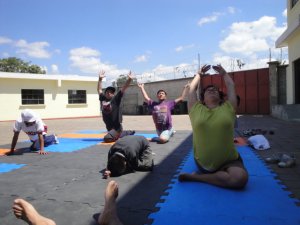 Before moving here, I was totally ignorant of Central America. I’m not proud to admit that I didn’t even know Guatemala bordered Mexico until consulting a map. I’d decided after three happy, frenzied years working at a bilingual elementary school in Austin, Texas, to seek a teaching gig in Mexico. Guatemala offered me the job instead. It had all my desired qualifications — Spanish-speaking, a temperate climate, and relative proximity to Texas. And yet it is so far away.

I knew, from a glance at the US State Department’s dire declarations, that murders, armed robberies and kidnappings are common here. I had a sinking feeling when I read that Guatemala had gone through a 36-year civil war that had ended with the signing of a peace accord in 1996. I wondered if I would survive but never thought of turning down this opportunity. Read on Elephant Journal.
The vast majority of Guatemalans are indigenous, descendants of the ancient Mayans. Centuries of mistreatment of indigenous Mayans began with the arrival of Spanish colonizers. They are treated as peasants, working the land and harvesting to keep the oligarchy rich. In the seventies and eighties, guerillas began to organize and fight back against their mistreatment. The Guatemalan government tortured and killed the guerillas — along with thousands of innocent indigenous people — in a genocide covertly supported by the CIA. I didn’t know any of this before I moved here.

Today, there is a precarious civilization in Guatemala despite a “peace accord” signed in 1996. There is still rampant corruption and alarming crime rates for everything from pickpocketing to first-degree murder, everywhere from the back alley to the downtown Cathedral. It’s always a possibility, and in some places a probability.

When I first arrived, I was careful to carry my cash in a money belt under my shirt, never walk at night, and never use my cell phone or iPod in public. Soon, I began to hear stories of teachers at my school who’d been robbed at gunpoint, often in broad daylight and even in “safe” zones of the city. Worse yet, stories emerged of the school’s wealthiest students having been kidnapped in the not-so-distant past, of people being gunned down outside their homes, murdered for money or drugs or lies or who knows what. A week after my roommate and I moved into our townhouse, a man was shot to death in the parking lot of the Pollo Campero less than a mile away. His BMW was full of counterfeit money. It was a hit. Still. Not the ideal welcome to the neighborhood.

I’ve personally interacted with some of the richest and some of the poorest people in this nation. Some of my students are the children and grandchildren of government figures, corporate business tycoons, millionaires. Many come from extreme wealth and privilege. By no fault of their own, they have had a lifelong sense of entitlement. They all have maids and nannies. Some of them have multiple bodyguards. They know their country has major problems. They’d like it to be better, safer, happier. But the corruption and crime is so rampant, all they can do is hide behind the barbed wire that protects their mansions.

I’ve also volunteer taught yoga to children who live in the slum next-door to the city garbage dump. These kids live surrounded by the stench and toxicity of trash, whose parents sort through the landfill, scavenging food, clothing, furniture, anything recyclable.

The documentary, Recycled Life, tells the story of the guajeros, the people who work in the Guatemala City garbage dump, a sprawling landfill that has been there for over sixty years. I was deeply touched by their persistence and spirit amid such unbelievably difficult life circumstances — and amazed by the compassion and vision of social worker Hanley Denning. When she stumbled upon the situation at the dump, instead of shrinking away in disgust or crying in despair, she got right to work. Within a week, she sold her belongings in the US, got permission to use an abandoned church building and cleaned out the dirt, roaches and rats to establish Safe Passage.

Today, ten years later, Safe Passage is a thriving organization that serves over 500 neighborhood children using donations from an international network of supporters. Their facilities now include an Educational Reinforcement Center where students come for meals, tutoring, medical care, sports lessons, art clubs, and friendship. Their early education and adult literacy programs serve preschoolers and parents similarly. Their programs focus on teaching vocational skills, self-sufficiency, and ultimately offer a way out of poverty through education and employment.

Yet in the windy, filthy maze of zone 3, near the dump, there is invariably at least one man slumped against a building or passed out in the street, obliterated from sniffing glue. And who could blame him? He’s only trying to escape the squalor in which he lives; poverty is too nice a word for it. The stench, the drab colored bits of trash dotting the streets, the toxic gases brewing in the landfill. Huge sacks of trash and recyclables overflow from the windows and doors of the shoddy homes lining the streets.

I can’t do much about these problems. They are deep and wide and daunting. What I can do is show up and lead a yoga class. When the kids are in downward dog, maybe for a brief moment they’re not thinking about their home life or family problems. They hiss like snakes in cobra pose, laugh and topple out of tree pose. It is a time to play, to wonder. They are breathing and stretching, cultivating self-love and body awareness, little by little. They are learning to accept the present moment, to balance and focus the mind and stretch beyond prior limitations. Yoga will not cure their poverty. But teaching them yoga shows them that someone cares about them. And their practicing yoga proves that they care, too.

If you look at the big picture, it seems impossible to scratch the surface of suffering. All we can do is stay informed, send metta, and act with compassion and mindfulness. Raise awareness. Donate. Lend a hand. Smile. Make eye contact. Listen. Inspire students to serve their community. Act. Love. Most of all, keep trying. Sometimes it’s hard, and the deeper you go, the more there is to heal, and to cry about. But in this time of crisis, and even when the world media moves on and the crisis is “over,” I will keep trying. We will keep trying. For Guatemala. For all beings.

5 responses to “land of eternal contradiction”